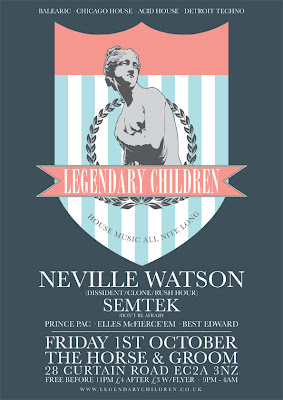 Legendary Children first came to my attention through the fantastic blog of the same name. The enthusiastic writing about all things house was an obvious draw for someone like me. But after a little bit of digging, it transpires that unlike many other house music blogs, Legendary Children isn’t the work of a fat, balding middle age bloke obsessing about Nu-Groove catalogue numbers on the internet, but spritely young DJs Prince Pac, Elles McFierce'em and Best Edward.

As well as writing the aforementioned blog, which embraces the golden age of House music, predominantly Balearic, Chicago, Acid House and Detroit Techno, the Children also throw London based parties in the same theme. Not content with playing music heavily rooted in simpler times alone, the Legendary Children party ethos is also reflective of an era where an inclusive crowd policy and love of the music takes precedent.

I caught up with Best Edward and asked him a few questions about Legendary Children.

So why are whippersnappers like yourselves into this authentic house sound rather than minimal-dub-tech-step or whatever the walls of Phonica are covered in these days?

“I used to play techno and house for Pac's ‘Last One In's A Rotten Egg’ night and we'd both started to despair at the throwaway culture of trying to keep up with always having the biggest, newest records that the juno/beatport culture creates and the sense of musical apathy that seems so prevalent amongst today's club goers”.

So you didn’t just wake up one day with an irresistible urge to seek out L.B. Bad records, did you?

“We had kind of all arrived at the point we're at now in very similar ways and it kind of made sense to form and kind of collective. For example, my older brothers were big into House during the late 80, so that sound has always kind of been on my radar”.

How it going then, are the kids into it?

“It's working out really well because over the last 8 months or so we've formed alliances with Andy Blake's ‘World Unknown’ night and ‘The Beat’! and started to generate a scene, and it's invigorated all of us as DJs to feel like you are part of something that people genuinely care about and enjoy”.

So there you have it, genuinely enthusiastic but neither clichéd nor throwbacky in their delivery of an old school aesthetic, Legendary Children demonstrate you really can know your stuff and have a good time doing it.

And if you fancy a slice of the action, check out the three 30mins mixes in their killer 'Hot Mix' series the gang have kindly shared with Beyond the Stars, which you can stream or download before.

Or even better, get yo’ ass, down to their next party with London’s answer to Adonis, the truly amazing Neville Watson at the Horse and Groom this Friday 1st October.

"...reflective of an era where an inclusive crowd policy and love of the music takes precedent."

I could have written that myself. Nice one, Miles.

I wish people would get over this 'Balearic' (top left of flyer) thing. It's got little or nothing to do with the real history of house music - in London or anywhere else (except perhaps the Balearic Isles?) Balearic was, in my opinion, largely a media invention designed to fit house music snugly into pop music's white middle-class agenda. It is sadly predictable that's its legacy remains and is so routinely unquestioned.

I like it that these kids have recognized that it's about something other than 'more, more, more'. There's, er, more to it than that.