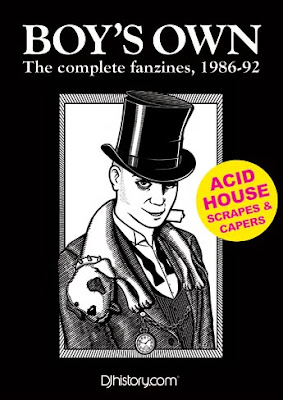 Way back when, 1986, a bunch of suburban lads from somewhere down the M4 corridor hit upon the idea of knocking together a fanzine. Covering the sort of stuff they were into - music, fashion, politics, London nightlife, football and all the tales that can be told about the last too, they called it Boys Own.

Running from 1986 to 1992 the fanzine became a bit of a phenomenon, despite the fact only 12 issues ever made it to print, spawning t-shirts, stickers, courier bags, at least two record labels, and paving the way for the likes of Gear, Herb Garden, Chortlers, etc, to have a go too.

I’m not sure of the secret of their success but maybe the fanzines tapped an almost virgin market, young people, young men in particular, who weren't catered for by mainstream publishing, were drawn to the irreverent humour, lists of records they hadn’t heard of, dodgy night club incidents alluded too, nicknames of geezers in cliques they knew nothing of but probably wouldn’t have minded being part of, piss takes, and even poetry, all of which was pitched at a level they could relate too, unlike, for example, The Face. A lifestyle for little herberts done on a photocopier.

All of the protagonists went onto bigger and better things, like producing Primal Scream LPs, managing Underworld stadium tours, running record labels, owning big old rave boozers, eventually earning about squillion quid and retiring back to the ‘burbs to chat Chelsea on the internet... but in between logging onto chat rooms and watching Loose Women, they’ve also managed to collate all 12 original issues of the fanzine in one hefty hardback tome, so whether you were a top boy or a massive ted at the time, it's an essential slice of acid house culture and a tip top read.

And to launch literary masterpiece, the boys held a little party over in Smithfields last Friday. Terry Farley, of Terry Farley fame, was kind enough to ask me to spin a few platters that matter (well that mattered about 20 years ago anyway), and as it can never be said that I would readily spurn the opportunity to dust off some, erm, dusty old records, I was more than happy to oblige.

I had a ball, warming up for about an hour and hour, before handing over to young Mr Farley, who was followed by one of the original Boys Own crowd, Plug, then Rocky out of the popular music combo X-Press 2, then Stripey, erstwhile resident (and ace) DJ at Yellowbook, and finally Terry’s old partner in crime, Pete Heller.

The party went with a bang and anyone who didn’t wake up with a stinking hangover the next day probably wasn’t there. Fortunately for those too drunk to remember, I recorded the whole night and here it is for your streaming/downloading pleasure.
Boys Own Book Launch Party - Me, Terry Farley, Pete Heller, Rocky, Stripey & Plug by Miles Simpson

If you like the sound of the book, you can download a free 44 page sampler as a PDF >>here<<

And if you really like the sound of it and just want to get your hands on a copy of it in its full hard back glory, you can purchase one via DJHistory >>here<<