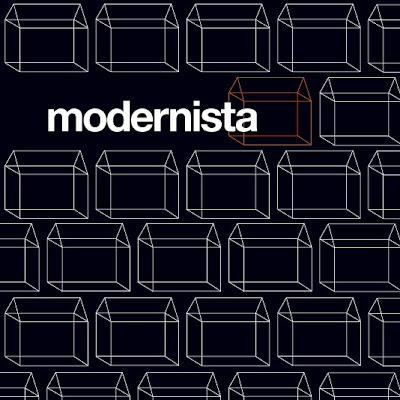 In the last week or two Paul Bennett’s Modone EP has been making a bit of an impression on music fans of the housey persuasion. With its old school Chicago sensibilities and new school production values, pressed up loud as hell and in lovely packaging too, clearly a lot of effort had gone into producing what it is very polished release - one that new label Modernista are making their bow with.

Modernista is the brain child Paul Bennett, Dan Harrington and Chris Blaik. All three have musical backgrounds, with Paul’s possibly being the most enigmatic. The boys are playing there cards close their chest but apparently he has a shadowy past as an incognito disco re-editor, possibly of a horse related nature, and these tracks on Modernista debut are his first original released productions.

London record shoppers will probably remember Dan ‘Steely’ Harrington from his time behind the jump at Vinyl Junkies, trying to bring some order to the chaos. And Chris, who has been being collecting records since he was knee-high to a grass hopper, was apparently renowned during the 90s as one of the great unheard house singers of his generation. Dan says, “Like an out of tune Robert Owens!” Whether this is true or not remains to be seen!

Dan and Chris met Paul in the mid 90s and clicked immediately through their shared love of music. After Paul moved to Greece, they hatched the idea of creating the record label during a visit to Athens in the summer of 2007. Despite all the doom and gloom in the record industry, dwindling record sales, crumbling distribution networks and a splintered dance music scene, they decided the time was now right to pitch in with their own imprint and their own style.

They say it was a simple plan - to make music that sits outside the slipstream of the latest hyped style or micro-genre and release it in lovingly constructed, high quality packaging.

But simple as it may seem, getting noticed in the hectic dance music market place these days requires a strong vision for the label. Dan outlined what Modernista is trying to achieve, “I know everyone says this but... we would like to work with all types of music, as we've all got varied tastes. 'Dance music' in the absolute widest sense. The first release has a real Chicago influence, but the next one is moving on from the windy city. We're just taking baby steps at the moment really, we'll see which way the wind takes us. The vision we have is grand but too grandiose for me to say now or we'll end up with egg on our faces!”

The quality of every physical aspect of the release has also helped it get noticed, with it being mastered at Dubplates in Berlin and the records themselves being pressed up at MPO in France. It seemed like a lot of effort to knock out a 12”, but the boys explained “We decided to use Dubplates very early on for just a couple of reasons - its association to Maurizio and Basic Channel, and the sound of so many productions that come out of there. They have an incredible depth and space in the sound that bring out. Ultimately, we love records. Vinyl is the best sounding medium for music reproduction, in our opinion, but it has to be manufactured to a certain level of quality to get the best out of it. If the mastering process is done by experts like Dubplates and Mastering then you're giving the music the chance to really shine and so we wanted to make sure we got the release to be as spot on as possible... Paul's effort in creating a lot of his own sounds, rather than using sample sounds, has helped as well. When we got the masters back from Dubplates it sounded like they'd sprinkled magic dust on the tracks!”

So none of the music contains samples then? “There are no samples. All the sounds and song parts are created on modern synthesizers, drum machines and sequencers, then recorded and mixed in a studio alongside an engineer.”

The packaging is also top notch. Great design, well made sleeves, something with tangible quality in these disposable times of ours and a world away from the white labels in paper sleeves that seem so prolific in our record shops these days. I asked Dan why they bothered, “Cover art is really important to us. I absolutely love the aesthetic of a label like Factory who allowed Peter Saville's designs to become a fundamental part of the labels output. [My wife] Finnie designed this cover - its quite obviously (and purposefully) modernist in style - which is something that influences us a lot, hence the name of the label. But, like the music, we'll be putting the effort in to do something different for each release.”

The debut single has been getting support from the likes of Dixon, Ame, Henrik Schwarz, Tama Sumo, Rocky & Diesel, James Priestley, Giles Smith, Prosumer, Terry Farley and, err, me. Terry Farley glowing described it as sounding like it was 22 years old but with modern day production levels. Dan said “That’s a great compliment to Paul's hard work. Terry put it in a nutshell, that's exactly what we were aiming for. Trax / DJ International etc, those tracks are incredible and truly ground-breaking. And though their rawness is part of the appeal some of them could have benefited from some of modern electronic music's production levels. Of course the pressings were hit and miss in that era. Some classics like Virgo 4 will for ever be heard through a veil of crackles and hiss. I think Paul has managed to tease out a bit of a modern edge to that early Chicago house sound.”

You can make your own mind up by checking the sound clips below.

I don’t think Dan and Co need to worry too much about ending up with egg on their faces at all. And having set such high standards, with a second release lined up for early next year, Modernista really does prove what the team behind it believe - the death of the independent dance music label hasn’t happened just yet.

Mix - You Belong To Me (for To The Bone)

I've gone done a house mix for the To The Bone crew. The boys, Steve Believe, Charlie Bennnett, and Rik Moran, have been putting on parties around London for a good few years now, bringing the likes of Rick Wilhite, Sven Weismann, Marc Scheider and the awesome Prosumer to these shores, not mention giving Mark E his London DJing debut.

More recently they have found critical acclaim via their podcasts on To The Bone Radio, in they meld a heady and eclectic mix of electronic music from across the ages with semi-coherent and often drunken rambling to great effect!

It’s a unique style that has won them fans across the country and even led to them being featured as ‘Podcast of the Week’ in The Times. The boys can be found DJing around town most weekends and much as it pains me to say it, are actually quite a talented bunch, so when they asked me to do a mix for their website, I was honoured to obilge.

You can check it out on the To The Bone Mixes Page here or you can stream it by clicking play below:
Miles Mixx - You Belong Me by Miles Simpson
Posted by Miles at 18:02 2 comments: