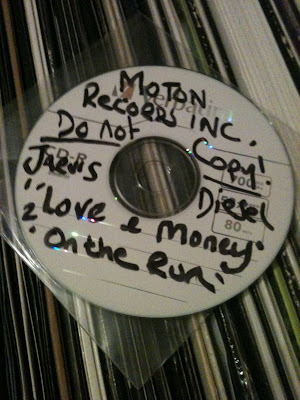 In the run up to the Christmas holidays, a number of musical goodies dropped into both the physical and electronic mailboxes at Beyond The Stars Towers. The quality of these treats and has driven me to review them all for your delectation. First up is the new release from Moton Records Inc.

Moton is Dave’s long standing collaboration with the more handsome half of X-Press 2, Diesel (sorry Rocky x), starting, albeit with a different line up, in the 1990s when disco edits were some way from most people’s minds. Now, after a break of almost 2 years, they’re back with their 30th release.

The first track, ’Love and Money’, is a slo-mo Italo chugger that quite definitely tips its hat in the direction of Herb Alpert’s ‘Rotation’. In fact if you can imagine a spacey, slow, dubbed out electro version of ‘Rotation’, with wailing echo soaked guitars and a girl breathily panting about money and love over the top, you’ll be well on the way to understanding what this sounds like. Actually, that sounds pretty good, doesn’t it? Well it is.

Things get more up-tempo with the second track, kicking off with a heavily edited choppy, staccato percussion intro, before the beats start rolling with a healthy smattering of cowbell, then when the bassline drops and starts to sound s bit like a long lost Ian Dury dub before the slick female vocal slides in and we’re in some sort of left field boogie wonder land. He’s on the run apparently. He’s out there just for you, in fact. Edits like this drive me round the twist. Why have I never heard the original? How can a track this good not be well known? Have I been living in a disco cave? Have they created a silk purse out of a pigs ear? There’s those choppy drum edits again. Then it‘s over. And I want to go straight back to the beginning.

Great track, great record, great to return to form from the Moton boys. The vinyl should be in the shops around the middle of February.
Posted by Miles at 23:41 No comments: 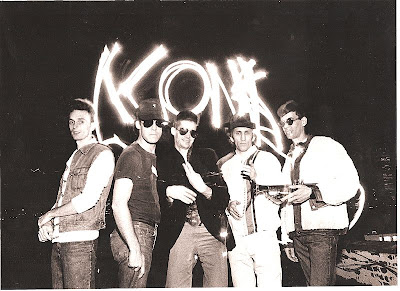 Konk are one of my favourite post-Punk New York bands, listening to their records always evokes images moments I never actually experienced on the dancefloors of The Roxy, Danceteria and Save The Robots. Pretty much all their records are great, but ‘Konk Party’, ‘Your Life’, and ‘Love Attack’, which is featured in this video, all come highly recommended.

Tompkins Square is just one of those really interesting places New York. It nestles between Avenue A and B in the lower East Side of Manhattan, in an area known as Alphabet City (because the avenues are lettered rather than numbered) just north of Houston Street. But when I first visited, there wasn’t any sort of NoHo vibe going on, east of Avenue B Alphabet City was pretty lawless - derelict buildings were abound, third world-esque shanty towns of homeless people existed on bulldozed blocks, projects bordered the area and drug dealers openly plied their trade on street corners.

Tompkins Square was also favoured by many homeless people and has a history of being a breeding for protest and public disorder, with it providing a back drop to the American Civil War draft riots in the 1860s, the infamous Tompkins Square riots when workers clashed with police in he 1870s, through to clashes in 44 people were injured, when the police tried to clear the square of homeless people in 1988. And the following year the ‘Butcher of Tompkins Square’ fed the homeless people, who were still there, soup made with human body parts (look it up if you’re ghoulish enough).

This video was made 3 years prior to that and 6 years before my first visit, so it was a pretty edgy place you probably didn’t want to hang around too much at night. I’ve been back many times since, not least because the now defunct Dance Tracks record store was a couple of blocks away, and Alphabet City has been massively gentrified and the only thing you need to worry wandering those streets after dark now is which coffee shop to buy your tall skinny frappucino from…

Anyway, the video is great and from another, more interesting time and if you watch the whole thing you get a few glimpses of world in in hard to imagine in existing in the heart of Manhatten. Oh and the music is great too!