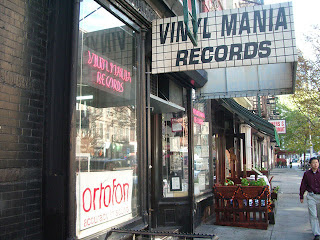 I recently stumbled cross a you tube video of the warehouse where all the deadstock from the legendary New York record shop, Vinylmania in is stored and it reminded me of what an absolutely fantastic place it was - almost a fantasy record store.

Vinylmania was opened by Charlie Grappone in 1978, ostensibly to sell rock music but after party goers from the Paradise Garage, which was just a blocks away, started showing up, he changed tack and started stocking the music that was being played in the club. Larry Levan himself soon started to frequent the store (see the picture below) and with staff that were regulars at the club itself, things really took off. 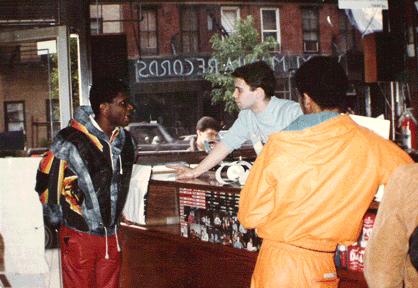 Some Saturday mornings, 50 people would be waiting for the shop to open and with one play of a record that Larry was spinning at the Garage, Charlie could shift 60 copies there and then - he believes that he sold around 5,000 copies of Tania Gardner’s ‘Heartbeat’ in his store alone!

I first visited the shop long after the Garage had shut up but experienced a tiny but of what had been, travelling there after a night at the Sound Factory and buying records we had heard Junior play the night before. The staff were amazingly friendly and helpful, and it seemed like the greatest record shop in the world at that time - although this was probably accentuated by the it being at the Heart of the New York hosue scene, which was at the heart of the world house scene at the time - what Frankie Kuckles described as a “golden era”. Off the top of my head, in the two weeks I was there, Alysus ‘Follow Me’, Djammin’ ‘Give You’ and Cassio ‘Baby Love’ all hit the stores.

On return visits so the allure fade a little and sadly, in 2007 Vinylmania closed its doors after almost 3 decades of business. But the stock has since moved his inventory into Downtown 161, a record distributor in Lower Manhattan, where he opens one day a week for a select group of shoppers.

And I dug up a few videos to give you a bit of feel of the store. But first up, here’s the:


Vinylmania 1991 - I paid my first vists a little later in 1992, but this is how I remember the shop. You'll see from the opening shots, the counter's pretty much the same as it is in the picture with Larry Levan above. However, it would seem the chat for the guys behind the jump had gone downhill - rubbish!


Vinylmania circa 2004 - A pretty dry clip but again you can see the shop has hardly changed at all since the 1991 clip. Lots of 'warehouse finds' on the wall, some of which are legit and some of which are good old fashioned bootlegs.


Vinylmania 2007 - The last day ever! Rubbish picture and sound quality but still seems emotional. I was gutted when I heard it was shutting...


This is the only souvenir I have of the shop that isn’t black and round. But now I know they take callers at their warehouse, to paraphrase one of the hits the shop sold, "It's - not - over" and maybe a return trip to NYC is in order! 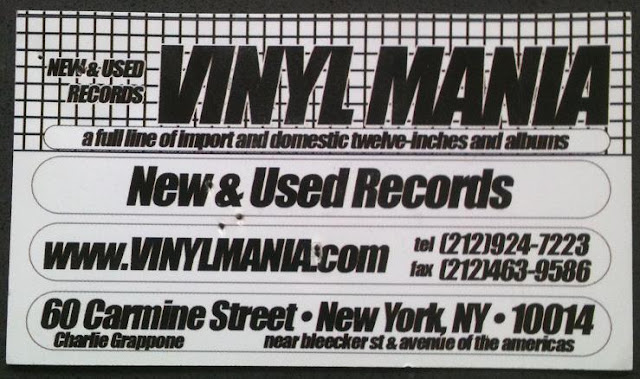