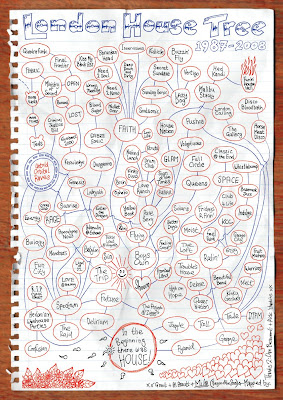 This map is my attempt to chart the history of house clubs in London. It starts with the earliest house clubs like Delirium (after it moved to Heaven) where the Watson brothers plied their trade and the returning Amnesiacs haven, The Project which was born in a grubby little dive in Streatham called Ziggy’s, and follows the logical progression through to the acid house explosion of ‘88, the orbital scene of ‘89, onto the move back into West End clubs with the likes of Rampling’s Pure Sexy, through to the super club phenomenon and finally ending up at modern day East End clubs like Secret Sundaze and Buzzin’ Fly, taking in Balearic house, progressive house, techno, leather trousers, long hair, feather boas, handbags, metro sexual clubbing and acid teds along the way.

I'd like to say I knocked it together in a hour down the boozer one lunch time but it was actually given a little more consideration than that - and I am indebted to Alan Arscott and Grant Berry (who runs Enjoy) for their efforts in getting the map right, and Alan again for his superb design work making my rough drawing look so lovely. I also owe a pint or two to Dan Beaumont (who runs Disco Bloodbath) for helping get the gay clubs right, and Rick Hopkins (who runs Dream Machine) for his input on the techno side of things (love you all x).

A printed version of the map appeared in Faith Fanzine, which can still be picked up from cooler shops around London or by going on the forum >>here<<
Posted by Miles at 10:46 5 comments: