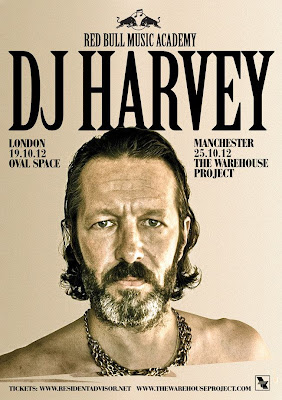 So Harvey is final coming back to play in the UK. And one thing is for sure, while he’s been away, waiting to get a green card, or whatever, his stock has gone through the roof.
It seems absence really does make the heart grow fonder. But whilst whether his reputation is based on myth or reality may be open to discussion, he is a man who certainly followed his own path when he resided in the UK - putting out disco edits when disco records weren’t even popular let alone edits of disco records, holding residency at the original super club, the Ministry of Sound, when it was actually good, running the seminal ‘Moist’ and the far out ‘Beautiful Bend’, spinning 7 hour sets at ‘New Hard Left’, and influencing a whole range of DJs with his diverse style and eclectic selections.
There’s likely to be a lot of cynicism around this event. The myth of Harvey, it’ll be  sausage fest, the Oval Space system is rubbish, etc, etc, but reports from Germany suggest he was fantastic when he played Panorama, effortlessly slipping from disco to techno and back again, and more importantly, really rocking the party. So, despite the backpack wearing, camera wielding wallies that are bound to be there too, I’m not sure this is a party to be missed, especially if the rumours about a Harvey approved sound system being installed are true.
I mean, if it’s great, really great, you wouldn’t want to have stayed in moaning and have to wait another 10 years for him to come back, would you?!
Tickets are available on Resident Advisor >>here<<
***STOP PRESS*** Oval Space have confirmed Harvey is bringing his own sound system and production for this party ***