The summer before last a New York based friend was kind enough to send me a copy of the first release on his new label. When the package arrived from the States, I was pleased to find it contained a lush, quality pressed, heavy vinyl 12”, individually numbered and with hand stamped artwork. Now as regular readers of Beyond the Stars will know, I’m partial to a limited edition 12” and if the music is good, hey, that’s even better!

And the music was good indeed. A tracky, looped up Mark E edit of Janet Jackson’s ‘R&B Junkie‘, that reworked it into what is essentially a killer house track. I took it out with me a weekend or two later and dropped it a party I was playing at Notting Hill Carnival. The reaction was instant, as the people the room hit the dance floor and teenage boys that looked like they should be extra in Skins were even taking pictures of it with their phones. One year later, ‘R+B Drunkie’ was still getting played, as the last record at the Secretsundaze bank holiday ending mega-rave, demonstrating both its unusual longevity in this age disposable digital music and the undoubted arrival of Golf Channel Records.

The baby of New York based Brit, Phil South, Golf Channel acts as a vehicle for Phil to put out a wide range of music made by people he has hooked up with directly or indirectly through the successful No Ordinary Monkey parties he runs in the city that never sleeps with a couple of close friends, Anton and Carlos.

Things really kicked off when Rob J, of the now late but utterly fabulous Bam Bam parties in Birmingham, sent him fellow Brummie Mark E’s edit of the aforementioned Janet Jackson song. Simple but hugely effective, Phil knew it would make a great debut release and despite serious interest from the likes of Prins Thomas and Running Back Records, Mark stuck to his word, gave it to Phil and Golf Channel was born.

Initially, Phil just pressing up 100 copies, embracing the old school concept of vinyl promo copies rather digital files regardless of expense, hand stamping and numbering them himself, and then distributed them to friends and people he thought would appreciate them rather than the usual DJ suspects. It proved to be a winning formula, tapping into people’s desire to own something tangible and even collectable rather than another mp3 on the hard drive, and combined with the quality of the track, the hype inevitably built.

This initial pressing was eventually followed up by a full thousand record run and when they hit the shops, BOOM! ‘R+B Drunkie’ blew up, crossing over between teenage hoodies, house heads, disco beards, and eventually proving to be popular enough to require a repress. 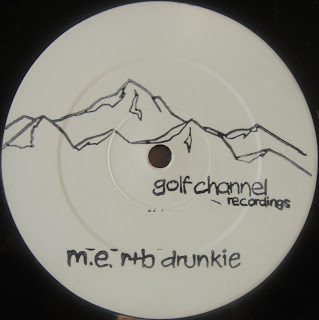 One place it didn’t end up readily though was people’s ipods, because in keeping with the traditional ethic of the label, no Golf Channel releases are currently available digitally. In fact, they don’t even exist in digital form. Phil cuts straight to lacquer when mastering for better quality and a warm analogue sound, so there‘s not even a digital master file. Why? Well Phil feels he is putting his money where his mouth is, by supporting a format he holds dear and doesn’t want to die out just yet - which is great news for vinyl luddites like me!

So how to follow this up? Another obvious edit? A catchy floor filler? Nope. The next release was anything but. Produced Phil’s No Ordinary Monkey partner, Anton Esteban and his friend Alex Posell, better known as drum’n’bass DJ Abstract, under the name Ghost Note, ’Holy Jungle’ is kind of spooky. In fact it has been rather neatly described as Juju disco, and if a Hammer Horror film about a country gent who returns to his secluded manor house from travelling the dark continent with a ghoulish man servant who it transpires is now his partner is some sort of voodoo cult before a giant moth eats everyone, could be turned into a disco record, then this would be it. 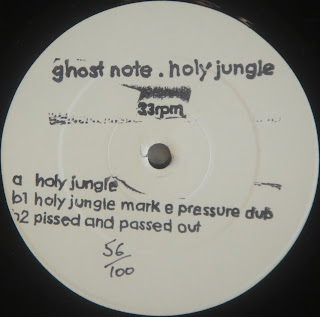 Anton and Alex wanted to produce something more substantial than yet-another-edit, so they made sure pretty much every sound was played and original - banging radiators and bottles for percussion, getting friends to play bass and guitar, and possibly hanging out at the Bronx Zoo with a tape recorder…

The finished product sounds unlike pretty much anything you’ll hear elsewhere but for the 4/4 fans out there, Mark E is back on the flipside, this time on remix duty, turning in a fantastic yet floor friendly remix that is more akin to sub-aquatic techno than the disco sound he is renowned for.

Hot the heals of Ghost Note followed ‘Try to Find Me Vol.1’ a slightly more trad edit two sider from an anonymous artist, whose identity Phil is not prepared to reveal . Apparently he is an established musician who normally edits for his own use only but following a bit of arm twisting, a bottle of bourbon or two and a few compromising Polaroid snaps (maybe), Phil convinced our mystery man to share them with the world. 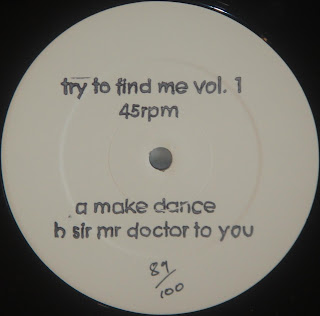 As the run-out groove legend ‘Trash to Treasure’ suggests, the only records this man will touch are ones he thinks are rubbish and would really benefit from a rework, eschewing the safe bet route oh-so-many aspiring editors choose to take. First up is down tempo moody rework of Chic. Hold on, what was all that about no safe bets, I hear you say? The track in question is ‘Flashback’, which it is fair to say most people don’t know. For good reason.

Then on the flip is the clincher. A proper one-buck-in-a-thrift-store-ash-in-waiting, reworked so it sounds like, in Phil’s words, P&P meets King Tubby in 2008 New York. Very New York in fact - and very, very good.

So with these first three releases under the belt, what’s next? More of the same for now but, in time, Phil wants to expand the label to take on fully formed bands and put out albums. He has eclectic taste in music and he wants the label to always reflect that. This is born out by the next scheduled release (due out round about the time you read this) which is a collaboration between Australian DJ duo Hey Convict! and krautrock hero Dominik Von Senger, who was part of the Phantom Band, Dunkelziffer and The Unknown Cases.

This slightly bizarre partnership came about after Hey Convict! played an obscure track called ‘No Name’ from Dominik’s only solo LP on the Beats in Space radio show, Dominik heard about it and got in touch to say thanks. The boys suggested a remix, to which Dominik readily agreed, only to find the master tape had been wiped of the original recordings. Refusing to let a little thing like not having any music to work with hold him back, Dominik has remade the track from scratch, Hey Convict! are providing one remix and Justin Vandervolgen of !!! and Outhud fame the other, with Rosko Gee, formerly of Can and Traffic, roped in to play bass.

A little bit more imaginative than another Sylvester re-edit, I’m sure you’ll agree.
Posted by Miles at 09:00 6 comments: