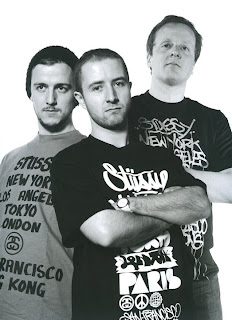 1 - Z-Factor 'Fast Cars' (Mitchbal) Not Joey Negro record but a Vince Lawrence (Virgo) and Jesse Saunders effort from 1983 and one of the first house records ever made. The SFX Version is the mix and it kind of sounds like 'Bad Boy' meets 'Racing Tracks' with a load of sexy breathy vocals on top. H.O.U.S.E!!!

2 - Disco Dream and the Androids 'Disco Dream' (Wake Up) This record is nuts! Basically is a space disco concept LP made by the people that built the Wasp Synthesizer…in Oxford! It tells the story of unrequited love between futuristic but malfunctioning robots, all set to a Moroder-esque tripping synth disco back drop. Big on CBS and so good those twats at Automan have bootlegged it. They haven't got the rest of the LP though and that's equally barmy.

3 - Karma 'Beach Towel' (Compost) Karma follow up last year's corker 'Father Father; with this I:Cube mixed gem. Like deep, atmospheric, bubbling, beautiful slow trance but in a good way, this is a stunning tune and this guy is one of the most consistent house producers in the world.

4 - Debbie Jacobs 'High on Your Love' (MCA) Paul Sabu produced druggy disco bomb from 1979 that I first heard on an old Ron Hardy tape. Debbie sings "Now a whistle turns me on, and if you know that, bang a gong; Now I work on solar power, and my batteries can last for hours"! What more do you need to know?

5 - Theo Parrish 'Synthetic Flemm' (Sound Signature) Off Theo's new triple LP there is no noodle here, just straight up driving techy acidic house (If you remember N&W 'Randomizer' from a couple of years ago, there are similar sounds). This will get you in the jackin' zone is almost worth the 23 notes the LP cost alone. Almost.

6 - Lopazz 'Share My Rhythm' (Get Physical) Not normal Get Physical gear here as Isolee turn out their best mix since, err…the last record they made (they're up their with I:Cube though). Quirky but dancefloor friendly, hard but then beautiful, driving but uplifting, there is so much going on in this tune it is truly brilliant. Perfect for dancing in German power stations to.

7 - Moment of Truth 'So Much Love' (Salsoul) This Tom Moulton produced number from 1976 is all about the instrumental. Except it isn't instrumental. It builds in lavish, big budget, orchestral disco way until the last minute or so when the vocals sore in and you are taken to a bit of musical heaven where you get to hang out with Jim Burgess and Walter Gibbons, doing poppers and wearing chaps. Perfect.

8 - Glimpse 'Caught on a Train' (Glimpse) This really is like being caught on a train, a very dark train, full of drug freaks that force feed you acid and lock you in a broom cupboard with a strobe light. Fookin' brilliant, dark, modern house music – and when it kicks back in it will destroy any decent dance floor in the land. Cheers to Roual and Dave for turning me onto this.

9 - Natural Ryththm 'Mumble Mouth' (.dotbleep) The follow up to the equally good 'Chicago Tower' this really just a great fun, scatty vocal, modern jacker on Justin Long's fantastic label. If this isn't getting caned by Derrick Carter, I'm Boy George (I didn't chain him up really, I was just making him a cup of tea).

10 - Skatebard 'Vuelo' (Radius) Radius is an amazing label and this is an amazing record. It kind of blurs the line between electronic disco and really quite scary techno. If you could try and imagine what a disco record made Joey Beltram and a Guy Called Gerald might sound like, well this is it.

11 - Gherkin Jerks 'Stomp the Beat EP' (Gherkin) One of the hardest records on Gherkin to pick up simply because it is the best. The Gherkin Jerks are Larry Heard at his most experimental and nothing demonstrates this more than the segue between the tough jacking 'Tar Disc' and the totally mental banging acid craziness of 'Acid Indigestion'. Old school Chicago at it's best.

12 - ESP 'It's You' (Underground) Brilliant, brilliant, brilliant record from 1988 on DJ International subsidiary Underground. I've heard this record loads of times but never knew the name until Rahaan played it Faith on NYE. Record of the night. Dixon then played at Weekend (on the 12th floor of an office block) as the sun came up over Berlin. I had a moment. Just about as good as house music gets, this is timeless.
Posted by Miles at 20:00 1 comment: